Feather was the first Japanese company to make replaceable blade razors.
Feather carries out thoroughgoing management of all of the products at the factories in Japan without relying on overseas production, and Feather will continue to pursue the quality that can only be made in Japan and that can only be created at Feather as ever.

side view of blade tip

The straight. ultra-sharp blade is precisely honed in micron units for optimum use in semilaminar incisions and centesis incisions of the sclera and cornea. 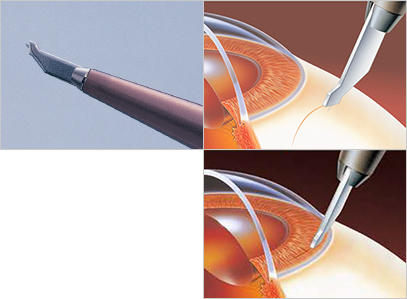 The stainless steel guard provided on one side of the 30°straight blade makes it possible to assure a consistent cutting depth for incisions in the sclera and cornea while also preventing obstruction of the viewing field during incision.
Furthermore the guarded depth feature of the ‘Groove knife’ makes it ideal for performing Limbal Relaxing Incisions(LRI).

The stainless steel guard of 0.1mm thickness provided on one side of the 30°straight blade makes it possible to assure a consistent cutting depth for incision in the upper half of the sclera.

The blade design features straight sides and a round tip and is optimum for creating scleral tunnel flaps.
In addition, this knife is available in bi-bevel, bevel-up and bevel-down types to accommodate the needs of surgeons.

The sharp, round blade edge is beveled on both sides,
gradually extending from the center of the circle,
and perfect for creating scleral tunnel flaps.

This knife is used for sclerocornea centesis incisions during cataract surgery.
A choice of knives with keratome angles (40°,45°, 50° or 60°) and blade edge types (bevels) allows surgeons to make a wide range of incisions. 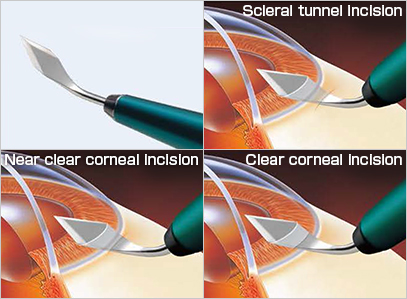 This knife is used for sclerocornea centesis incisions during cataract surgery.

This knife has a blade with chamfered side edges to facilitate smoother puncture into the sclerocornea, giving less tissue invasion.

This knife is used to widen the incision wound opening for implantation of an intraocular lens.
The trapezoidal shape of the blade tip enables it to be used safely.

The stainless steel guide of 1.0mm width provided on the blade edge makes it possible to widen the incision maintaining the uniform depth without deviation.

This knife is used for centesis incision into the sclera during vitreous body surgery.
It is also used to create side ports during cataract surgery.

This knife is used for making incisions in the sclera.
It is also used to create scleral flaps during glaucoma surgery.

Grab the Best Deals
Get Latest Deals, Offers & Products Updates Via Email
Get A Quote